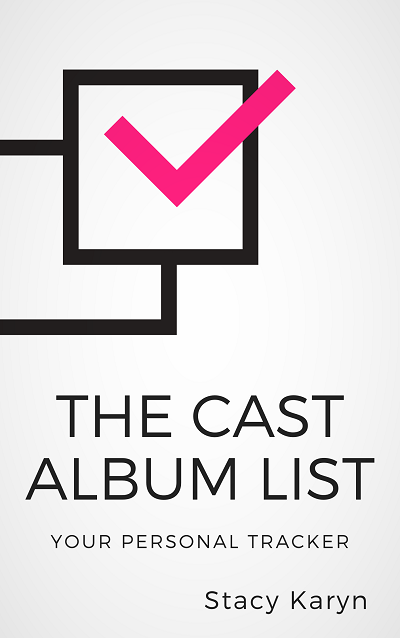 The Cast Album List is a digital checklist that will allow you to keep track of all of your musical theatre listens! You can access updated versions of the list each year as new cast albums are released.

This is more of a living and breathing document rather than a physical book. And it will be shared as a Google Sheet – so a Google/Gmail account is necessary for access!

Take a Peek Inside:

♪  What is a cast album?

A cast album (or cast recording) is a musical recording of a stage musical. The primary intent of a cast album is to document/preserve the songs as they were performed with a certain cast and for a certain show. Sometimes they can be taped live, but usually they are recorded in a studio, just like a regular music album!

♪  Do cast albums also contain the dialogue from the musical?

Sometimes. But usually you’ll primarily hear the music from the show with just a little bit of dialogue sprinkled in. But if it’s a sung-through musical (like Falsettos), you’ll basically be getting the full experience.

♪  Where can I listen to the albums listed?

Almost all of the cast albums listed can be accessed through Spotify. But there are some others that are only available through Apple music or Amazon. But in The Cast Album List, you’ll be provided with links to every single album so that you can easily listen to each one.

♪  Is it okay to listen to a cast album before seeing the musical?

That’s totally up to you, but I say yes! Cast albums enable us to magically access past performances that we would otherwise never be able to experience. But if you happen to see that musical at some point in the future, just go into the experience with an open mind. Because the musical will be different than what you’re used to.

♪  I haven’t listened to many cast albums yet. Where do I start?

Also up to you! You can go through the list alphabetically, you can choose at random, you can ask a good friend what their favorite albums are, OR you can check out my own list of cast album ratings and start with my favorites!